Photos for the past week... and a little visit on Tuesday on the way to the airport

Here, as promised, are some photos in illustration of the last week of my February Gambian trip:
Tuesday 13th February: 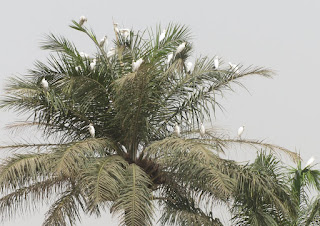 We suddenly had a visit of a very large number of the white egrets who feed in and around the hotel - something must have startled them, as several hundred of them flew up and roosted in the palm trees in the hotel garden.  An amazing sight... 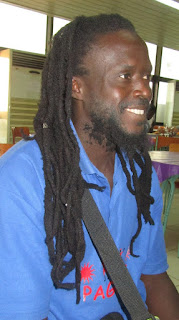 Whilst at the airport waiting to see Andrew and Kathy off to UK, we realised that Abdoulie was in the process of gradually cutting off his hair (a few locks every day or so), so  we felt we should record what was left before it all disappeared.  Abdoulie has been growing his hair ever since we first met him, so this is quite a decision on his part! 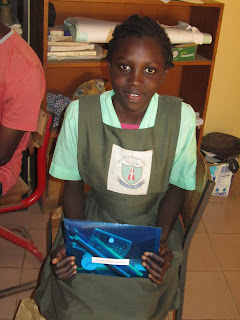 These were days of school and family visits - lots of photos of children, amongst which is this one of a newly sponsored girl, holding her 'welcome to Pageant' gift.  As she is in Grade 7 (Junior Secondary school) we gave her a pencil case with the basic pens, pencils, ribber, sharpener etc for school, plus a simple calculator, a geometry set and a small English dictionary.  This ensures that she has the basic materials to help her in her school work - it is always a very popular gift. 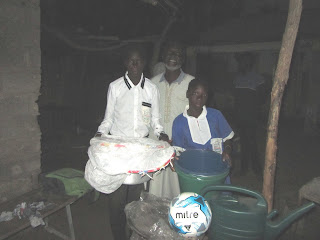 Our trip to the North Bank.... this started very early in the morning, as you may remember. (I remember it vividly!)  It was so early that this photo of the family with the delightful gifts from one of our sponsors had to be taken in the pitch darkness in the compound outside the house.  No electricity in Barra, which makes for wonderful star-gazing, but is not so good for even flash photography. 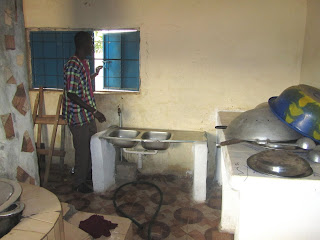 Later that morning we visited Albreda LBS and saw the tap, sink and work surface that had been installed in the kitchen.  We suggested that the sinks and draining board could do with a bit more support - it was sagging a bit without any water in it(!) so they will put another support in, either along the front or between the two basins.  However, the tap works, the water flows freely and drains away back through the pipe in the wall to a soak-away outside, so that was all good.

The work on the multi-purpose hall at Humanity nursery is going well - outside view at the left, inside, looking towards the existing school buildings, at the right. 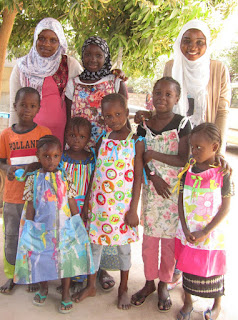 These are some of Esther's beautiful little dresses (these were actually made by her Mum, I believe) - very popular with the little girls who were lucky enough to receive them.
The young women with them are two of the recently graduated Automotive Engineering students, still very happy to be working in the repair departments of some local garages.  Fatou, on the left as you look at the photo, is the person who is in charge of the women's group associated with the mothers of the children in Humanity Nursery.  She was pleased to tell me that the group is doing really well and that the money is now on its 4th iteration around the women.  Well done to her and to all the ladies of the group. 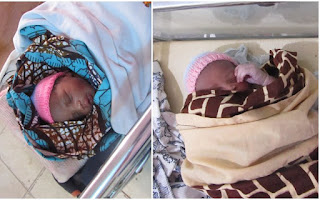 These are some of the tiny babies who received the hats at Brikama hospital - more thanks to Esther.  The youngest baby was 2 hours old, the oldest 2 days old!  I was a little worried about disturbing the mothers so soon after delivery, but the nurse said they would like to have the hats... and the photos... 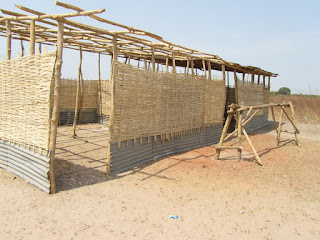 On our way to the airport for my return trip to UK we managed to squeeze in one final visit.  This was partly to get the estimate for a cement floor for the temporary classrooms that have been erected to cope with demand at the Yundum Barracks school - the one for the nursery at the left is not quite finished yet, but the roof is expected to be completed next week.  Another one, further down the school compound, has been completed and is for the overflow from the Lower and Upper Basic schools. 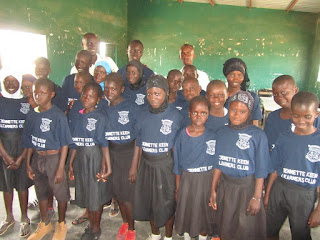 The other reason was to collect the stack of letters that the LBS children are writing to Jeannette Mars' Worldclass club at Bishop's Waltham Junior School in Hampshire.  The Gambian school, pupils and teachers, are really enthusiastic about this and the school has funded special T-shirts for the members of their club.
I posted the letters off to Jeannette yesterday, so I am waiting to hear the reaction from her children.


That's all for now - I'm signing off until the next time.   Lovey sunshine today - but brrrrrrrrr, isn't it cold!!??