This was a real mega shopping day.  You may remember that Battle Rotary club had given Misera BCS £500 for tools - this was the day we were going to spend it!!

Modou Touray, the school's deputy, had arrived in Brikama yesterday evening and we had arranged to meet him at Westfield for the shopping expedition.  £500 translates to D31,800, so we had split the money into three lots of D10,600 to be spent on each of the three technical areas - woodwork, metalwork and home science.

We started at a recently opened toolshop in Kanifing - wow, what a shop!! 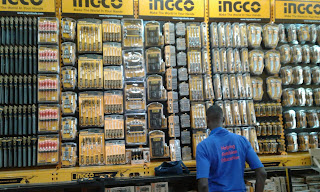 a mind boggling display of tools

We must have spent about an hour in there, buying a large proportion of both woodwork and metalwork tools.  Modou, in the red check shirt, took the whole thing very seriously and went round all the display shelves and cabinets with his lists in his hand, choosing the best things for his students. 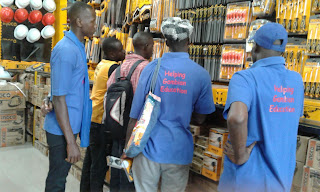 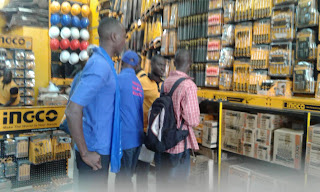 Modou and the Pageant team discuss what to buy

I had a good look round the displays myself, noting down some prices and making a couple of purchases.  In the photos the prices are, of course, in dalasis - divide by 63.5 to get the current cost in  £s. 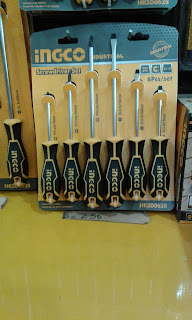 Off to a second shop to get a few missing items, particularly the set squares. 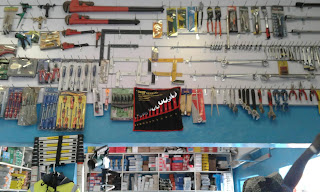 tools right up to the ceiling
This completed the woodwork and metalwork purchases, so we now went off to the shops in Serrekunda for the home science materials. The first shop we visited had a quantity of good quality cooking and serving items, which Modou preferred to the more traditional items used in most family compounds. 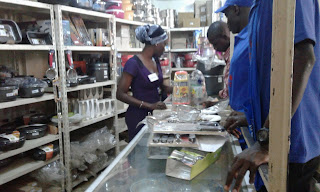 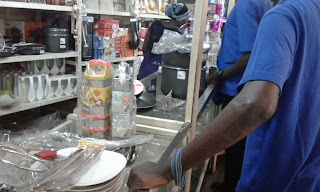 things for home science
He said they would last longer and give the students a real sense of pride to be using them.

Lastly to one of the really traditional Gambian shops to buy fabric, thread, scissors and so on.  I did not go into that shop with them, as the prices would have soared if I had been there.

By this time Modou had a large number of quite heavy cartons and one large bag, so we took him to the local equivalent of a UK bus station so that he could get them all into (or onto) some transport that would take him to Brikama.  He will be staying there overnight before returning to Misera tomorrow.

A really satisfying experience... as Modou and our guys said, there is no other school in the whole region with such good equipment, so a huge thank you to Battle Rotary club.

This had taken us almost exactly four hours, so we had a quick visit to the Westfield supermarket to stock up on water and a few bits and pieces, and then returned to the hotel...see you tomorrow, one and all.