(Sorry to all the blog readers about the break in communication...a late return on Tuesday coupled with a VERY early start on Wednesday has rather upset my schedule...however, I am hoping to catch up now.)

We started rather later than usual, as this was the anniversary of the birthday of the Prophet, which entails a lot of praying during the preceding night.

So our guys arrived at 1pm to take David and Regina to the airport for their flight home.  The roads were blissfully quiet as it was a public holiday, so we made it in good time and escorted them into the departure area. 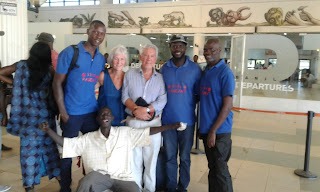 Regina & David with our guys

The guy in the front of the photo is Ansumana, the deaf mute and amazing mime artist, who always comes to greet us at the airport.

Having said our goodbyes we went off to Lamin, to find out about another bee keeping organisation called Africa BEEcause, which also offers training opportunities to people all over The Gambia.  It has been set up by a UK registered charity, which you can find at www.Africabeecause.org if you are interested.

It is a very lovely set up, located in the forest on the way to Lamin Lodge, and has around fifty hives in three different zones. 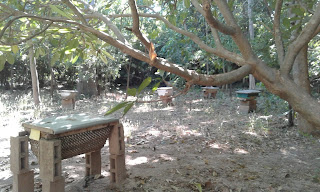 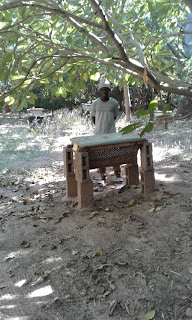 one of the hives

Most of the hives are the Kenyan type but they also have some grass ones, a large version of which is the one beside Modou, one of the training officers, in the second photo.

We discussed various aspects of training but could not get any final costing as the chief training officer was away at the time.

They were also kind enough to invite us to have lunch with them in the delightful setting outside their little office buildings. 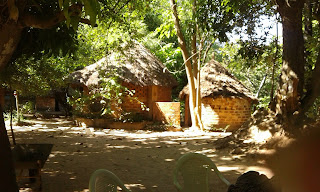 Another enterprise is a small nursery of saplings for reforestation - all in all a very good visit. 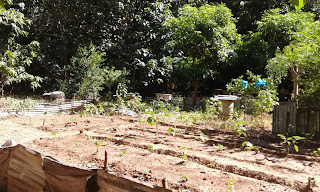 We then went on to see Faks at Humanity Nursery...he has been in Holland until now, so it was a good opportunity to catch up with him before he went back to work.

The new multi-purpose hall that we have funded for the school is wonderful!  It was completed about three months ago, in time for the new term, and is all we could have wished for and more... 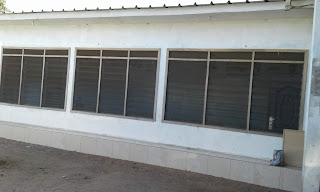 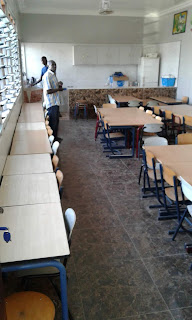 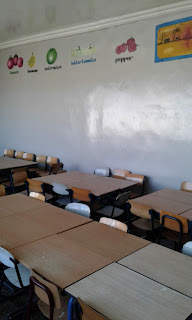 Faks says it is not quite finished yet as he has a few additional touches to add, but it is in use for school meals, assemblies and the equivalent of PTA meetings.

We had a couple of other things to discuss with him, the first being a piece of large inspection equipment called a Mantis (which was in the microscopy lab at ERA) that we felt could be well utilised in his department at GTTI.  He was really excited by this - I had taken some instruction leaflets with me and he examined them with great interest.  We are going to deliver the Mantis to him on Friday and hope to get it installed during the morning.

The last item on the agenda was the proposed Pageant Power Hut, the brainchild of Andy, a former ERA colleague of mine.  The aim is to provide a solar powered source of lighting for between fifty and a hundred students in a poor community and we felt that the prototype could not be better sited than with Faks, who is so community-minded himself.

The idea is to erect a small building, with solar panels on the roof and suitable electronics inside, to power enough connectors for lamps for every senior student in the community. Andy has designed the building and the electronic circuitry and the plan is for him to take the parts to make both the latter and the lamps out with him during a visit to The Gambia in February......so this visit was to see if Faks was interested in the idea and, if so, where we could put the building.

I am pleased to say that he was as excited about the idea as our three agents had been been we first discussed it with them.

We went from the nursery school to his compound to see the proposed site... the photo shows Faks and our three guys each standing at a corner!!! 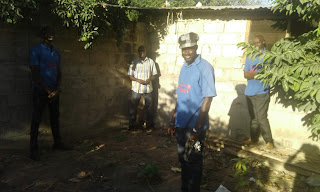 proposed site for the power hut
It will have to be built before the February visit, and we left sketches and plans of the building so that it can be ready for us when we arrive.

Andy's plan includes teaching the students to make their own lamps - Faks said the new hall would be perfect for that - so I think he is going to be busy!!

After what turned out to be quite a protracted visit we were rather late returning to the hotel...and we had an early start the next day.  More of that later.....