We have found from past experience that the first ferry goes ever earlier..it used to be 7am, then it went to 6.30am, then we missed one that had apparently gone at 6.15am!!

So, determined to catch it this time, we arranged for the guys to pick me up at 5.30am!  And, they were on time...what a good start!!

On arriving in Banjul and parking the minivan, we found that a ferry had gone at 5am!!  Not a regular one, we were told, but probably one for a special government visit....  To our relief, the normal "first ferry" appeared and left pretty well on the dot of 6.30am – perfect.

To the left of the ferry-docking part of the port was what appeared to be a large ship with all lights blazing.  This (actually two ships joined together) is the Turkish power station that is currently (sorry about the pun...) supplying the great majority of the electricity in this region of The Gambia.  It is on a two year contract and has greatly improved the power cut situation...the limiting factor is now some of the outdated wiring that will have to be replaced. 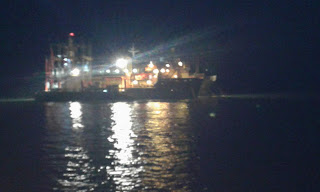 Sorry about the quality of the photo (my little phone is not too good at taking photos in the dark), I'll replace it with a better one from my camera when I get home.

We arrived in Barra at daybreak, a familiar sight to those who have travelled with me on earlier trips. 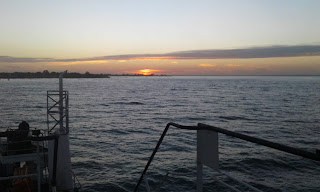 As we had arrived so wonderfully early we immediately travelled down the long, sandy, bumpy red road to Albreda LBS and met the new headteacher there together with his deputy and another senior master. We were there to discuss a couple of projects; a toilet and shower block for female staff, completed since our last visit... 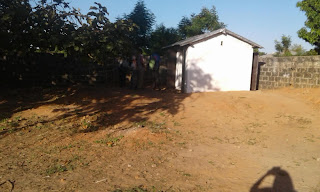 The toilet and shower block appeared to have been done very nicely - two toilets on one side, two shower cubicles on the other. 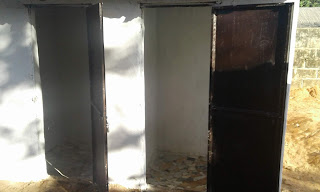 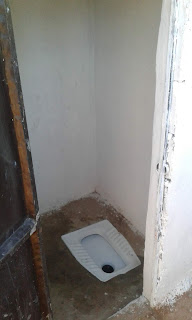 one of the toilets

No running water, of course...at present it is brought to the building in buckets but they plan to get a larger water storage tank nearby that they can fill it and use it as and when needed.

The original plan for the accommodation block was to renovate the old, very dilapidated kitchen building.  However, the new headmaster has a different idea, and wishes to build a new block between the existing male staff quarters and the newly built toilets and showers. They will provide us with an estimate for this, to be discussed at a Trustees' meeting after I get home.

A quick visit to Bakary (Wandifa's brother) and family at their compound, to deliver a gift for one student and take some photos of others, was followed by a rather belated but delicious breakfast at the riverside cafe that we have visited before on so many trips.

Back up the aforementioned red road... I should tell you at this point that Abdoulie, having a rest from driving, had elected to spend the whole trip in the luggage compartment of the very rickety four wheel drive vehicle that we were using. 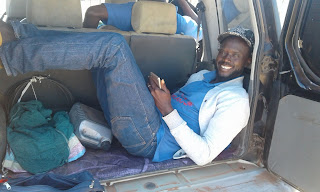 There was enough room in the body of the car, but he said he preferred to lie down there, and actually managed to sleep for quite a bit of the journey!!  Many of you will know how impossible that sounds!

Back on the tarmac for a short while and then down another sandy track to a small school that the son of Alieu, our regular north bank driver, attends.  I had promised Alieu that, if his son did well in his first year at Primary school, I would put him up on our website as a candidate for sponsorship....and he has done well, so his photo was duly taken and various necessary details noted down.

My last stop was at Barra-Essau UBS, to which four of our sponsored students have transferred this year.  On our arrival we found that all Grade 7 students go in the afternoon, so our agents went off to their compounds to photograph them (and to chastise one of the fathers who had not produced the reports from last year!) while I stayed to talk to the delightful headmaster, who we have known for many years.

(Those of you who were at the microscopy workshop at his school several years ago will remember his consternation and amazement at seeing a tiny creature swimming in what was supposed to be clean water from the well!!  He still has the book of photos from that workshop and it vividly reminded me of what was a lovely day.)


This very prestigious award was received just a few weeks ago by Barra-Essau UBS. They are the only north bank UBS to receive this award and the headteacher was kind enough to say that the teaching materials and instruction received from Pageant had been of great help in achieving it. 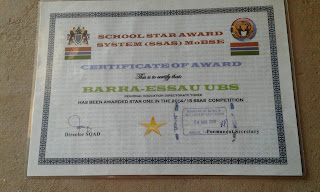 
Back to the ferry port... and not too long to wait.  We were back in Banjul not long after 2pm, the quickest we have ever done a north bank trip.

A couple of visits, one to Modou to give him the cash to buy the medical bits and pieces necessary for his houseman position at the hospital, the other to deliver the last of the gifts from sponsors.

Returned to the hotel by 3.30pm...to find that I had a visitor expected at around 5pm!!  One of our headmasters, coming to greet me as he had missed me upcountry.

Just time for a shower and hair wash...one of the times when the floor of the shower looks like a beach when you have finished!

Dinner with Linda at Luigi's completed what had been a busy and rather lengthy day... a day off tomorrow, I agreed with the guys...see you at 9.15am on Friday....