We started a little earlier than usual today, as we had made an appointment to see Faks in the automotive engineering department of GTTI at 10am...one never knows how heavy the traffic is going to be these days.  As it happened it was not too bad and we arrived about ten minutes early.

Just as well that we did as we hit a snag at the entrance - the security guy was not happy about the large crate we were taking in for Faks, so we had to wait until some sort of clearance had been obtained. Understandable... I felt he was fully justified in his cautious approach and he was, as Gambians usually are, very polite about it all.

We eventually arrived in Faks' office and began to unpack the Mantis (those of you who have been concentrating will remember that it is a large piece of inspection equipment!).  It is based on a microscope with the optics arranged so that the image is focussed on a viewing screen in front of the binocular eyepieces...this means that one does not have to actually look down the eyepieces themselves, which many people find quite difficult, but can just look at the screen.

It has a very deep field of view, so quite large objects can be held and moved around by hand while being examined at reasonably high magnification (x20 and x40).

We went to look at the location that Faks had decided upon for it and he found a sturdy table to which it could be firmly screwed down. These fixing screws are completely hidden once the Mantis is assembled so it is not at all obvious to see how to remove it...a good point, we felt!

A class was being held in the chosen room, so we started to assemble it in the office and then paused for a welcome coffee break while waiting for the room to be cleared of students.

The final assembly complete, it was plugged in...and, success, it worked immediately!!

Not only did it work but Faks and the other teachers, whom had by now gathered round to see it, could use it instinctively.  They brought several bits of engine and some circuit boards to examine and the smiles said it all.  An immediate positive response... Faks was thrilled. 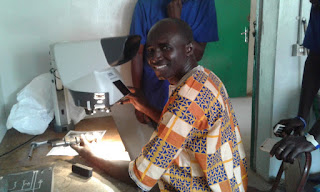 Faks with the Mantis 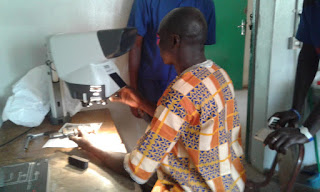 Faks with the Mantis

As we left he was in the process of finding some rawlplugs so that he could fix the table to the wall... I think he feels that other department heads might be rather envious!!

This all took quite a while so, after a brief visit to the Westfield supermarket, we set off to Kings Kid Academy for our last visit of the day.  We had gone mainly to check up on and pay for one of our sponsored students - successfully - but did wonder if we might see Bishop Dennis, as we have not managed to connect with him for some time.  However, he is once again out of the country....but Elisabeth, his wife, says she thinks he might be around in February.

Back to the hotel just in time for Friday prayers after a very successful morning.

Linda and I are going to Mama's for the fish buffet this evening and are being joined there by Pagent members Richard and Carol, who arrived last Tuesday.  They stay at Ocean Bay, so it will be a good opportunity to catch up with them.