We were a bit disappointed that the fish buffet at Mama’s had been cancelled because of a late delivery of the fish. We are assured that it will be back next Friday, but will phone to check first. Nevertheless we had a very good meal there.

On Saturday morning we visited the Manneh compound. Alan and his wife sponsor two students there. The family moved into the house only 2 days earlier having spent 5 years building it. We spent a good time chatting with Ramatoulie and her siblings. Ramatoulie is a former Pageant student who is now doing very well in the hotel business. She is now a deputy manager in the Atlantic Hotel in Banjul.

On then to see and chat with Jarra who is Carole’s sponsored student.

After that we went to Lamin Lodge for a light lunch. Lamin Lodge is a former slave trading post set in the mangrove swamps. Whilst eating we were kept entertained by a very friendly monkey. 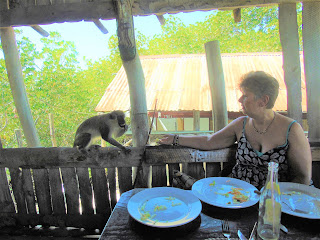 In Lamin village we met with Mohammed, a scout whom Pippa and Carole had met at the Remembrance Day service at the Fajara war cemetery in November. Mohammed had said then of the difficulty in getting scout badges, so Carole had collected an assortment of these from scout troops local to her and she presented these to him. 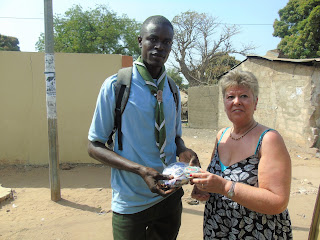 We then returned to the hotel for a relatively early finish. Tomorrow we are having a rest day. Linda is coming over to the hotel with the children from her house for some fun and games in the pool (the children, that is). On Monday we are going to the north bank which means a 5.30 start so we can catch the first ferry.