To the North Bank

Having spent a rest day on Sunday by the pool we were ready for an early start on Monday to catch the first ferry at 6.30 for the North Bank. Unfortunately the team was a little late so it was a rush to catch it – previous experience has shown us that the ferries don’t keep to a strict timetable and can leave early. We arrived at the ferry terminal at 6.15 and could see that the ferry was loaded and ready to depart. We moved as quickly as we oldsters can and scrambled aboard. Abdoulie, who had been parking the van had to run. He jumped aboard, the ramp was raised and we were off.

We berthed at 7.00 and our taxi was waiting. After a brief stop to buy 3 x 50Kg sacks of rice to give as ethical gifts from Pageant members we headed to Albreda LBS to inspect progress on the female staff quarters being built with Pageant funds. Because Albreda and the north bank are quite remote it is difficult to attract teachers unless accommodation can be supplied.

The journey there took about an hour over very bumpy, rutted unmade roads: a real bone rattler. We were met by Mr Jawara the head teacher who showed us the part-completed building. We were all very impressed with the workmanship to date. Mr Jawara confirmed that he needed the rest of the funding allocated to complete the building and we were pleased to give it to him. The school needs more staff accommodation still and on satisfactory completion of this we will consider further funding. 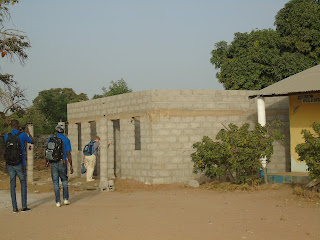 The staff quarters under construction

The early start meant that we missed breakfast at the hotel, so with rumbling tummies we headed to a nearby bar/restaurant for a coffee and a bite to eat.

Feeling more human we headed to Bacchary’s compound. Bacchary is Wandifa’s elder brother and the compound is very poor. We were very pleased to give the sacks of rice to three of the families there who were in much need of it. Whilst there we also paid two sponsorship monies. 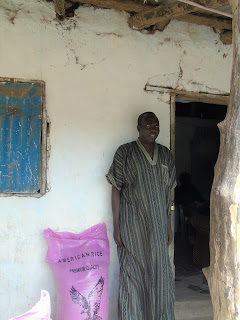 An ethical gift of rice

We returned to the ferry stopping off to pay some more sponsorship in Barra. As we arrived a ferry had just arrived so we were able to get on it.

On the crossing back we could see the mobile power station which is moored in the harbour. The Gambia has suffered from a chronic power shortage for many years. Those who have been there will know of the frequent and often long-lasting power cuts. There have been far fewer this year and The Gambia is currently building more power stations. Whilst these are being built, to address the shortage the Power ship Karadeniz has been leased  for two years. It is connected to the national grid, and for the techies amongst us, it is generating 36 Megawatts of power. 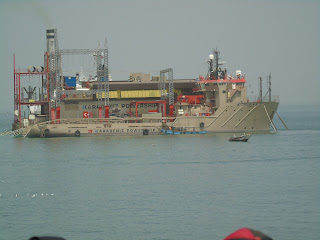 The power ship at Banjul

As we were back quite early, we were able to make a few sponsorship payments and met up briefly with Dr Modou Jeng, now qualified and working as a doctor. He had formally graduated at a big ceremony a week ago. He was on duty, but came out to see us.

Feeling very hot and dusty from all the sand on the north bank we returned to the hotel for a welcome shower.

As a postscript to Saturday’s blog, whilst we were at Lamin Lodge a local musician was playing. Abdoulie joined in and showed us all that he has a wonderful singing voice. Here’s a photo taken by Carole showing him enjoying himself. 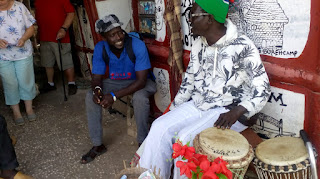