Many villages in The Gambia have no mains electricity, so it is very difficult for families to provide lighting and recharge mobile phones. Solar power seems to be the obvious answer but the cost of the solar panels and associated equipment is beyond the means of the great majority of people. Pageant member Andrew Williams designed the Pageant Power Hut as an integrated system, providing and charging portable lights to enable children of a village community to do their homework after dark and also for charging mobile devices. This is his account of his trip to The Gambia in April 2019 to set up Pageant's first Power Hut.

"It's easy to get involved with good causes but never more so than when it.s one sweetened by Pippa's unique blend of arm-twisting, charm and enthusiasm. It is with such a potent cocktail that I sat at her kitchen table reading several letters written by pupils seeking support and noting the need for task lighting at home to enable them to do their homework. For me as a lad this would have been a great excuse not to prepare for tomorrow's lesson, but clearly these pupils wanted to learn.
Weeks later and the design for a system to fulfil this need had already evolved from a parasol-type arrangement, with the central support fitted with power outlets round which pupils would study, to a power hut providing fifty USB outlets for charging mobile devices and the capability to charge batteries to power fifty lights for home use. The plan was for the pupils to build their own light from a kit of parts provided and for them to take their batteries to the Pageant Power Hut once a week for charging.
Despite taking out over 20kg of key parts and sidestepping hassle from customs, thanks to Yankuba, the first three days of my two-week visit were spent largely shopping for parts. The Gambia experience for me was in and out of a myriad of shops being guided by Wandifa, Abdoulie and Yankuba as to where parts might be purchased. 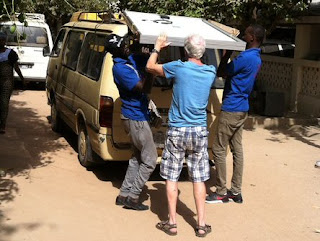 Brian helping to remove solar panels from the van.


This was rarely simple as, despite designing the hut and lights for simplicity, much of the technology availability in the UK doesn't exist in The Gambia and the sales process is chaotic, to say the least. Several times I resorted to climbing over the counter and helping myself and, after the first time, the staff were quite accepting of my rather direct approach. Where a shop did have some cable, for example, they only had it in red and not black. Then only one metre and not four metres. The correct crimp tool for the solar panel connectors required us to follow a chap across town to his compound - he was a solar installer and the only person we could find with the correct tools.

The Power Hut is located inside Faks' compound and houses the electronics to charge the central battery, shelving for mobile devices, USB outlets, and battery chargers for the lights - with solar panels on the roof, of course. Faks is an automotive engineer and, as the two project leaders, we hit it off well. As in all good teams, though, everybody played their part in the usual friendly Gambian way. 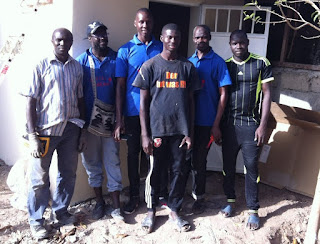 the 'extended' family
(Faks on the left, Abdoulie, Yankuba and Wandifa in the blue Pageant shirts) 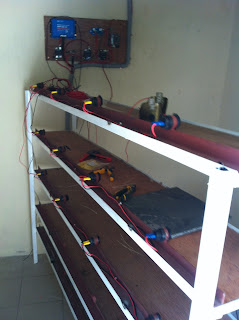 shelving with USB outlets being installed 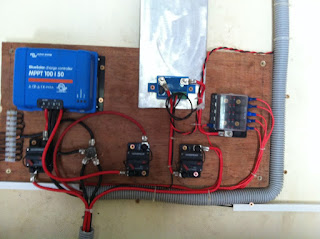 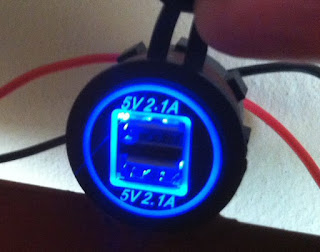 one of the twenty-five twin USB outlets 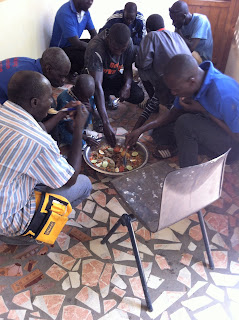 Once the wiring of the Power Hut was under way, we focused on the lights. These can be best described as a 'Wembley arch' of galvanised steel wire on which the light-emitting diodes are fixed. While the design looks simple, even crude, it needed to be constructed by pupils and had to provide an even, glare-free light suitable for studying - not especially easy given the intensity and beam angle of LEDs. The final design runs for approximately 40 hours on one charge and provides an even, glare-free light over three A4 pages side-by-side. The light can be used to illuminate the room for other domestic duties simply by placing a piece of tin foil or other shiny material in place of the paper - as long as homework comes first!
The pupils decorated their lights prior to assembly. However, after a very exhausting day of construction some of the lights still needed fettling so they were held back, snagged and then given to the pupils later in the week. 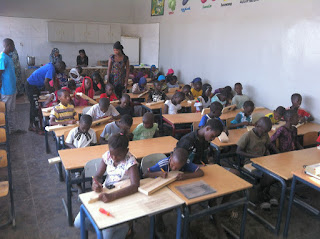 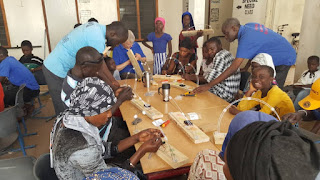 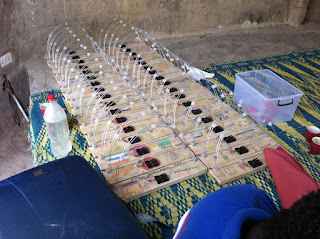 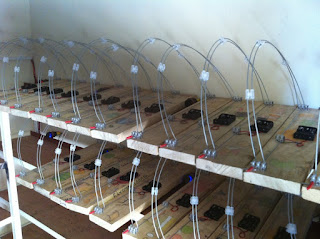 a closer view of the construction of the lights
Each pupil was given a laminated battery card, about the size of a business card, and these will be handed in with the batteries when the batteries are left for charging, typically between 9am and 4pm. The cards provide traceability and a similar approach will be taken for the users of the USB outlets. 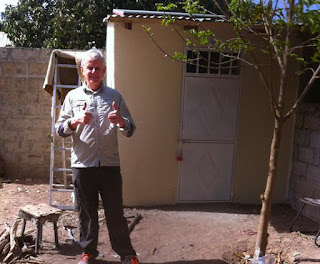 Andy outside the completed Power Hut 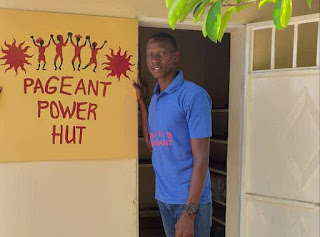 the sign goes up on the Power Hut
Despite considerable thought about the hut and lights before I left the UK, lessons have been learnt. If the Pageant Power Hut is not to be a one-off, then designs could be improved and costs reduced. Having said that, if the prototype Hut has a life of ten years, even with some parts being replaced throughout that period, it could equate to £5/pupil/year. If the Hut design only provided charging for lights this could be as low as £1/pupil/year.
It just remains for me to thank all those in The Gambia and the UK for the opportunity to complete the project and for those who supported it financially. It might not change the world but I hope it's changed a few lives.

What next for the Power Hut?


Andrew and Pageant have learnt a lot from this prototype Power Hut. We are now thinking about the next stage and are estimating the costs and logistics of rolling this out to provide further, possibly modified, Power Huts at other locations in The Gambia. When we have this information, we will be launching an appeal for funds to assist in what we believe is a very worthwhile project. Please check this page on our website where we will publish more information as it becomes available.