We started off a little later than usual.. because we were all pretty tired after the previous day.

Even so, we were at Yundum Barracks just after 10.30am, where we dropped Andy and Yankuba off at the engineers' offices so that library plan discussions could start as soon as possible. [More about Yundum Barracks Schools]

Wandifa, Abdoulie and I continued to the school, where we met the four children who have been newly sponsored by Jeannette Mars and her Wordclass students. [More about Worldclass at Bishop's Waltham School] We gave pencil cases to the children and the first sponsorship payments to their families. Balla, the headmaster, explained to the families that this money was for education purposes and he had a few specific items that he wanted them to buy...school badges and a PE t-shirt plus the four text books for the core subjects so that the children could have them at home for studying. Wandifa then added his bit about providing reports on time and gave them his phone number so that they could contact him if necessary.

After that, one of the mothers stood up and gave us a heartfelt speech of thanks on behalf of all the families...very nice to hear, and also, incidentally, in very good English.

We then gave Balla the good news that his garden project estimate had been accepted by Jeannette Mars. He was, of course, delighted.... even more so when I gave him the money, which was counted by both Wandifa and himself and then signed for.

Having accomplished all the school business for the day we rushed back to see how the library plans were progressing... Balla was very keen to be there as quickly as possible!

We found Andy deep in discussion with the chief engineer and three of his designers. All the plans were laid out on the table, as well as the very detailed estimates for each stage of the project. 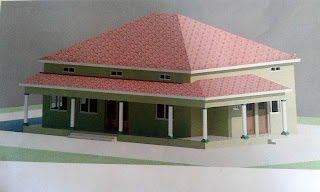 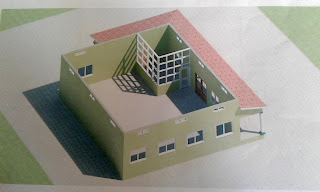 plans for the new library at Yundum

The building looks really excellent... Andy's design has been faithfully followed and we now have something with which I feel the donor would have been very pleased.

The total cost figure was, however, too high! We continued our discussion and eventually managed to get it down to a figure we can cope with....without compromising the integrity or capacity of the building itself.

I am really looking forward to showing these plans to the executors of the donor's estate, as I am sure it will be exactly the sort of thing they had in mind to carry out her wishes.

We were also delighted to find that the engineers were excited about the library project themselves and were determined to follow it through the building stages to make sure it was all carried out to a really high standard.

I must take this opportunity to thank Andy for all the work he put into his design... without this and his original sketch we would never have progressed so far.

Having completed our session at Yundum Barracks, we set off to Lamin to visit the bee compound there. I wanted to check on how last year's project had gone at Mayork Upper Basic school with a view to doing a follow up if things had gone well.

As luck would have it, Peter, the chairman of the UK charity Beecause that funds the work done there, was actually sitting, talking to Gibbeh, the head of Gambian operations when we arrived. We had spoken over the phone earlier in the year and it was really good to meet him. He took Andy on a tour of the set-up there while I talked to Gibbeh about the project.

She was very pleased with how it had all gone and was planning to send her training team to the school for their final field support session in a couple of weeks' time. On hearing that we were planning to visit the school ourselves next week she decided to bring that training session forward so that we could meet both trainers and school trainees at the same time.

I told her that if we were happy with what had been done at the school we would give her another batch of funding. This would be to get the school apiary up to a viable size and to increase the number of bee-suits so that more students could be involved. It would also cover a couple more field training sessions.

Both Gibbeh and Peter were delighted that we are funding a school based apiary... they would like to hold it up as a model to encourage more schools to participate.

As we were in Lamin it seemed only sensible to take Andy to visit Lamin Lodge... such a delightful place for lunch and a drink. We enjoyed some chicken yassa and chips there before heading back to the hotel for an earlier than usual end to our day.

So early that we had time to phone Linda and arrange to meet her for supper at Luigi's... where, I am pleased to say, we looked far more presentable than on the previous evening.