Friday: Wandifa and I set off to Banjul to buy some ethical gifts and small wooden animals for our Pageant market stall...we were driven by Jereh, leaving Andy with Yankuba and Abdoulie, making more lights.

We bought a good array of items and then went on to deal with a 'problem' student regarding her attendance at skills school. To be fair, the mother is more of a problem than the girl herself! Having sorted that out we continued on our way back to the hotel via another couple of stops (more ethical gifts) and arrived back in time for Wandifa to join the other two Gambians for Friday prayers.

By the end of the day the number of completed lights had considerably increased...the photo shows them stacked up in the little hallway of Andy's room. 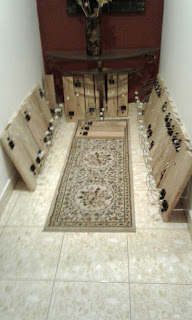 Saturday: Off to see Faks and the Power hut...the first time I had seen it. Very impressive and we were really pleased to find a load of batteries already being recharged and several children arriving with their lights to have theirs done during the day. The system seems to be working pretty well.

We went to visit the compound where a couple of light-owning students lived, to see how and where they used the lights. This was very helpful regarding how the new generation of self-contained lights could be sited when we go up country.

After leaving Faks we went on to discuss sponsorship of a recently bereaved student. He has an excellent Grade 12 certificate and has started to read economics at the university but has no funding since the death of his father a few months ago. He had managed to scrape enough together from the 'charity' at his father's funeral to pay for part of the first semester and we agreed to make sure he can complete his first year and will try to find him a sponsor for the remaining three years.

On to see the mechanic that Aboulie knows and trusts, to talk about engines of possible minivans...a very helpful guy who was happy to discuss things with Andy and had a few helpful pointers regarding available vehicles.

Next...a bicycle purchase...a gift from a sponsor to 'her' young lad who is doing very well in school.

A supermarket visit for water,  washing powder and cake (Andy) and yoghurt (me)...then our final stop for the day was to get a load of exercise books bought as ethical gifts from a few donations.

Back to the hotel...said goodbye to the guys until 9am tomorrow...and then waited for a headmaster to arrive for a planned 4pm visit to discuss a library project.  At 5.45pm I phoned to check that he was on his way, only to find that he thought the arrangement was for Sunday!
Ah well...good thing I'd checked!