Sunday: What an exciting day...

We started off fairly quietly - Andy and our Gambian team were making some more lights and I was catching up with some admin. (Abdoulie was banished to the garden for the first hour as he was making 'too much of noise' banging in the pins for the first stage of the assembly process...see photo). 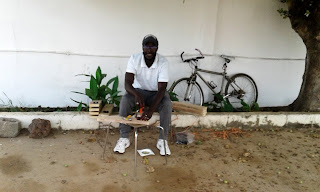 Abdoulie making lights in the garden

We had arranged to go to see yet another minibus at about midday, which we had seen yesterday not far from the hotel. We set off and parked a little way back to avoid the vendor seeing Andy and me and so putting the price up. Abdoulie, Yankuba and Wandifa went off and had a good look at the vehicle, even taking it for a short drive. After quite a lot of discussion they waved for Andy to join them, whereupon he also had a good look over, under and inside the van. Eventually they all returned to where I was still waiting for them....and they all thought that this could indeed be THE minibus for us.  After lots of talking through the pros and cons it was decided that Abdoulie would get his trusty mechanic to give it the once-over.

Andy and I were waiting for the headmaster to come to discuss library plans so could not go with them...they left with enough cash in sterling to buy the vehicle should that be the final decision.

The library meeting went very well...Andy had sketched a plan of what we felt it should look like and the headmaster was delighted with it! He left us having promised to arrange a session for Andy to get together with the engineers to thrash out a final design...tomorrow if at all possible.

So....tomorrow promises to be even more exciting...we could end up with a new minibus AND an agreed library plan....fingers crossed!