Another early start.. we aimed for 6.30am but eventually set off at 6.45am as the early breakfast we had ordered did not materialise as early as we hoped. This meant that the traffic on the road down to Brikama had started to build up, probably adding about a quarter of an hour to our journey time.

After we had turned east along the main South Bank highway we lost the traffic and bowled along merrily... such a lovely part of the day and the countryside is beautifully green at this time of year.

We arrived at our destination village, turning east off the road just short of Soma, at about 9.15am and were greeted by the headmaster, deputy, chairman of the school management committee and all the pupils of the Lower Basic school that has only recently been started there. They all sang us a song of welcome, introduced themselves and then it was down to business.

The committee had selected about thirty children, in whose homes the lights were to be fitted. They were called out of class and everyone discussed the order in which the lights would be fitted... who lived near who, were there children who lived in different houses in the same compound, which was the best way for the car to go... and so on. 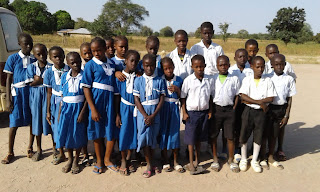 children selected to get lights

In a surprisingly short time we were all at the first house and it was only now that the actual installation process could be worked out. This first one took some time as we tried different methods of supporting the little solar panels, getting the leads through from outside to inside and positioning the light in the best place for homework. 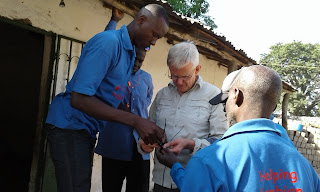 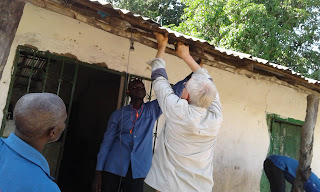 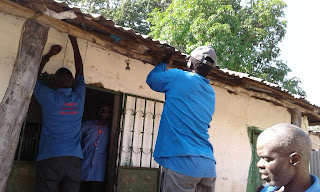 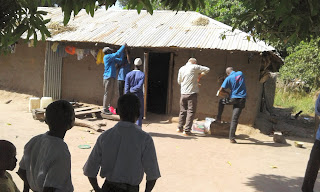 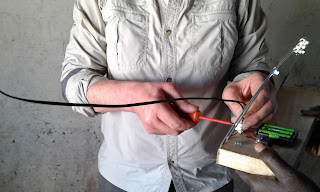 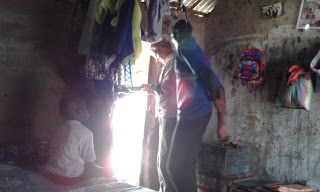 inside one of the homes 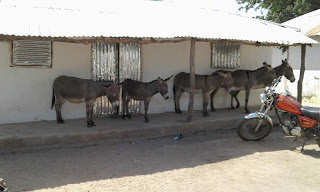 Having tried out a few different methods we settled on what was pretty close to the final way in which all the lights were fixed. Variations in roof height, direction of slope, homework position could all be accomodated in this method and the installation team gradually worked their way around the village. Our Pageant team was soon joined by: the chairman, who was thrilled to be able to carry the large reel of strong galvanised wire over his head and shoulder from house to house and eventually graduated to cutting it to length; and the deputy who was put in charge of the multimeter used to check each installation. They very happily answered to 'Wireman!' and 'Meterman!' respectively and appeared with alacrity whenever summoned.

The team eventually completed all the designated houses (28 in all at the final tally) at just after 4pm... a long, hot process.

I had left them all to it after the fifth house and had gone back to the school with the headmaster to discuss the ongoing requests (football kit and a ball or two featured heavily here) and to give out some items to those children whose houses had NOT been selected for lighting. I was very keen to ensure they did not feel left out, so I had taken a very large collection of new girls' pants and boys' boxer shorts of various sizes to give out. (These had been bought by a very kind Pageant member who was distressed at the thought that the poorer Gambian children just do not have any underwear.)
Underwear may seem an unexciting gift to us, but these children were thrilled... and a lot of very animated chat went on -  in English - as to which pair would fit which child! In the end I gave out around 70 pairs and every child ended up with either a light or some underwear. I wasn't sure which they were more excited about!! I didn't feel it was really appropriate to publish the 'underwear' photos here.. but I have taken some to give privately to the kind donor.

We left the village at about 4.30pm (after the roof rack had been loaded up with eight large sacks of local charcoal, bought by our Gambian guys as it is so much cheaper than where they live) and arrived back at around 8pm... much slower than the way out due to heavy traffic build-up on the roads from Brikama onwards.

Andy and I got the lads to drop us off at Luigi's for a quick omelette and chips before going back to the hotel... we sat in a dark corner so no-one could see how disgustingly dirty we were!