A leisurely breakfast as the team was not scheduled to arrive until 11.30am to take Andy to the airport. (It didn't take him long to pack as most of his incoming luggage was electronics for the lights... all remaining in The Gambia, of course!)

We duly set off for the airport, calling in at Yundum Barracks on the way to collect the revised estimate for the library.

We had hoped to be able to have a drink with Andy in the upstairs restaurant after he had checked in... but no, that no longer exists, due to the renovation work on the airport terminal building.

So he gave his final team talk to our Gambian guys in the nearest bit of shade we could find, I took a last team photo...and he disappeared into the chaos of the terminal. 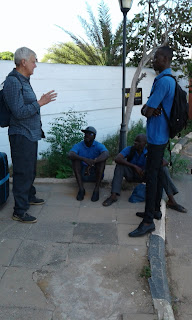 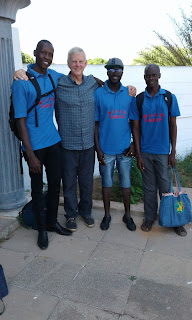 Andy and the Gambian team


We did see the incoming flight arriving as we were driving around a little later in the afternoon... so at least there was a plane for him to go home in!

We then started to try to catch up with all the other things I have on my list for this visit...

We managed to tick several things off the list: chased up a FE student and discussed her rather unrealistic suggestions as to which course she might do; found a couple of Grade 9 girls who have been given some unexpected assistance; photographed several students along the way; managed to track down an erstwhile workshop trainee teacher and, in so doing, confirmed that Nakulang is still at Gambia College. This is really good news... I have been trying to phone him at intervals during the past two weeks and he has never answered, so I was starting to think he must have gone into retirement. I now have reasonable confidence that we will be able to find him when we go to Brikama on Thursday.

Back to the hotel fairly early... we have another upcountry trip scheduled for tomorrow, so it should be a 6.30am start. I have threatened the kitchen staff with awful consequences if the breakfast is not in reception at the requested time!