This was to be North Bank day..so we left the hotel at 5.30am to catch the first ferry from Banjul to Barra. Unlike some previous occasions all went according to plan and we were safely on the ferry when it left at 6.30am. We had crossed as foot passengers and were met by our long-term North Bank driver at the Barra terminal.

Off down the normal roads (short tarmac, long bumpy red road) to Albreda, where we had a couple of things to do at the Lower Basic school.

The first and most pressing task was for Andy to try to assess whether or not the solar-powered system (installed with World Bank money about eight years ago) could be made to work. This system and about 40 others like it had been intended to power computer suites in schools and reputedly none of the installations had ever worked properly! 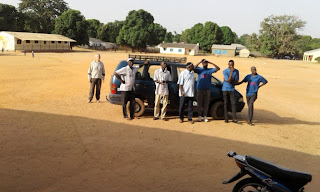 our Gambian team, school staff and Andy looking up at the solar panels.


Having surveyed the eight solar panels from ground. level, Andy and our Gambian team got to work on the electronics panels and batteries inside the proposed computer room. 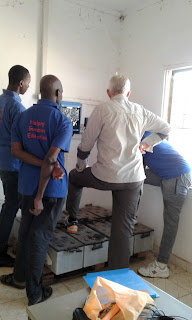 Verdict: the batteries (probable cost around £1,000) are completely unusable; the solar panels themselves are still working; the inverter and other electronics look OK visually but cannot be tested without working batteries; the internal wiring of the room checks out OK as continuity goes; the computers ( good quality Dell) have never been used so stand a good chance of working.

So...what do we do? Considerable discussion and pricing of various things to be done on Wednesday....

While all this was going on I was inspecting our latest project at the school...female staff quarters. The building has been largely completed and the first room is occupied by a very happy teacher. However, there are no ceilings in the building so the rooms are hotter and more prone to visits from insects than they should be. 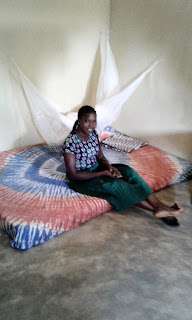 a teacher in the female staff quarters 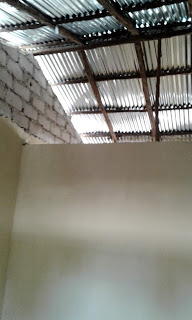 The local carpenter was summoned and provided an estimate for the work there and then...this was agreed and paid so the ceilings should be done very soon.

The (new) headmaster then had a couple of other project requests, for which I asked him to provide estimates in the normal manner.

A group of second and third year students sang us a very moving little song composed by a member of staff...and then we left to have a very late and well-earned breakfast in the local cafe...cheese omelettes and chips all round...yummy!! 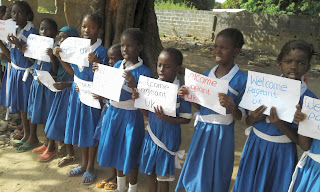 After a flying visit to Wandifa's brothers were off back up the red road to Barra, where we delivered some very generous gifts to a sponsored boy and his family...among them a bicycle for the boy himself. The photo shows him reading a letter from his sponsor. 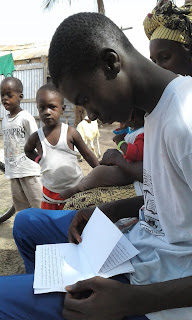 Back to the ferry port... amazingly a ferry was actually there loading up, so we felt very lucky. Even luckier...we saw several dolphins playing alongside the ferry as we travelled back to Banjul...a truly delightful end to a very full day.

[More photos will be added when the Gambian Internet permits!]