An early start... and the packed breakfast was in reception before 6.30am, so my threats obviously worked!

Our first stop was at Mayork, on our normal route and just a short distance before Kalagie. We were calling in to see the bee installation at Mayork Upper Basic school... at least, we thought we were, but on arrival we found it was at the Lower Basic school! The guys of the field training team from Beecause were there when we arrived just after 8am... they had been at the school the previous day and had spent the night there in order to meet us and show us round.

There were two groups of hives set in glades road in the forest - a delightful setting and looking ideal for the bees, with water quite close by as well. The school now has ten hives in all... six of them were occupied, with a lot of bees buzzing around them. Kebba, our guide, explained that the bees had been somewhat disturbed by the activity yesterday, particularly as some of the hives had been raised higher off the ground to protect them from termites. He suggested that we should keep well away from them... a very good idea, I thought! 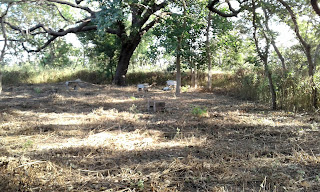 The remaining four hives have been brought back into the main school compound for maintenance... termite damage has to be repaired and then the hives can be repositioned in the forest glades. 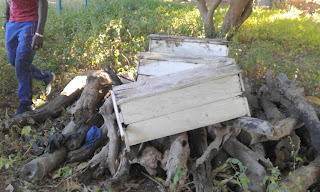 Hives to be repaired

The school is delighted with the training they have received, plus the increased number of both hives and bee-suits, as a result of our donation. We agreed that a number of smaller bee-suits should be made in order for some Grade 5 and 6 children to take a fuller part in the activity... and maybe the project can be extended to include the Upper Basic school, which is on the opposite side of the road. The headmaster there is very keen on the idea....

We said goodbye and continued along the road, through Soma, to Misera Basic Cycle school, at which we have done a number of projects in recent years.

We checked out the large new metalwork and woodwork benches and the tiling in the Home Science room...the latter is just about to be inspected by the Education Department to make sure it is suitable for exam purposes, so we hope all goes well. 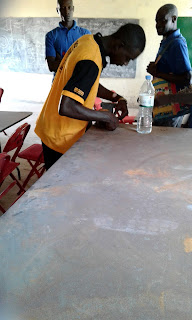 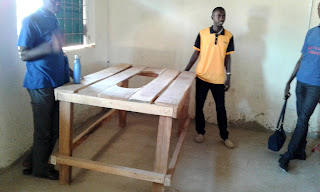 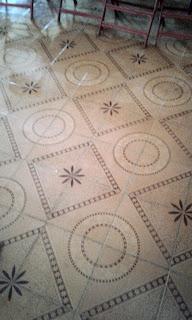 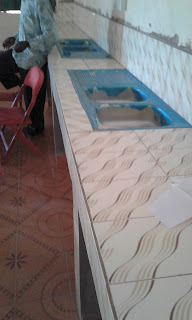 The next thing on their agenda is toilets... we had agreed an estimate for two blocks of four, one block for girls, the other for boys. However, they would now like to change this to two blocks of three PLUS a small block of two for the ECD children. They feel the latter is necessary as these small children find it difficult to get all the way across the school compound to the main toilet blocks without having an 'accident'... so a small toilet block near their classrooms seems a sensible suggestion. 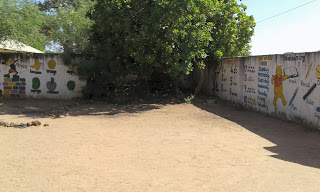 They need to provide us with a new estimate, but I left them with enough money to start work, as the project has been agreed in principle.

Then on to find out what has happened regarding a sponsored student who has completed Grade 9 but not told us where he will be going to Senior Secondary school. He has been living with his grandmother for the past seven years.... but now, she told us, he has been taken back to live with his father in Brikama. As it happens, we will be going there tomorrow, but I do wish some of these families would let us know where their children are!!

Having accomplished everything we set out to do, we hit the road for home... very thankfully as the upcountry temperature was around 43C today!

We called in at Gambia College and managed to arrange to meet Nakulang, head of science, tomorrow morning... hurray! I really do need to speak to him about workshops for next February.

A long Brikama day ahead tomorrow - we plan to leave here at 8.30am.