An early start, and what’s more, a prompt start. We were off upcountry and had a 2½ to 3 hour drive to our destinations. We made very good progress to Brikama before turning inland from the coastal strip to drive up the long, but well maintained, South Bank Road. The Gambia is a poor country, but the upcountry villages are often very poor. Many of the villages have no electricity at all and no running water.

Our first port of call was at Mayork to the Lower Basic School there. In the autumn last year, we had arranged for beehives to be installed there and training given on how to maintain these and look after the bees. The funding for this came from a UK charity called BEECause.  Their mission is the promotion of beekeeping as a way of improving livelihoods, particularly of the rural poor and, of course, encouraging initiatives to increase the bee population, as this is crucial to pollination and hence to mankind. The hives there are doing well, and they have harvested honey sold to the families of the children there and the proceeds reinvested in the school. They said that they would like a swarm collecting box to hang in the trees and collect new swarms. There are also plans afoot to set up an apiary in the nearby Upper Basic School. 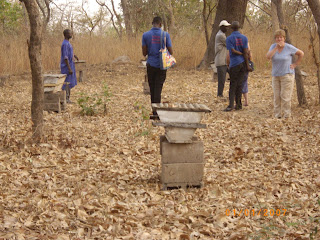 Inspecting the hives at Mayork LBS 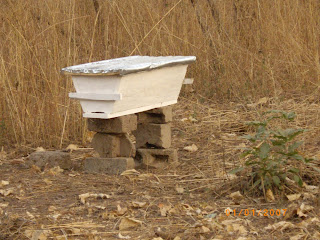 We also had a look round the school garden which is fine fettle. All the usual vegetables seen in Gambian school gardens were there and indeed more advanced than some. So, here is Gardener’s Question Time. What is the vegetable growing shown in the picture below? A clue: it is a type of vegetable commonly eaten in the UK, but the variety we eat is usually a different colour.

The answer will appear in a few days’ time

On then to a school that neither Pippa, Kathy nor I had visited before, Kolior LBS. Kolior is a small village just off the main South Bank Road. It is very poor. There is no mains electricity to any part of the village including the school. Yankuba, Abdoulie and Wandifa went there last autumn to fit some solar lights there as part of our solar lighting project. These are different from the first ones fitted as they don’t require a building to house the charging equipment. A small (about 5cm x 5cm) solar panel is connected by wire to a rechargeable battery charger inside the house which houses up to 4 rechargeable AA batteries. These are used to power the LED bulbs: Very simple, yet very effective.

The school site also had a very dilapidated building which clearly was severely damaged, it had no roof. From the painted signs in the past it had once been used as a library, among other things. The principal explained that a storm had blown the roof off in June 2015 and they had been trying to get funding from a variety of sources but to no avail. We said PAGEANT might be able to help to enable them to get the building restored to working use. The principal was invited to give us a detailed estimate of the cost of doing this and we will consider this. 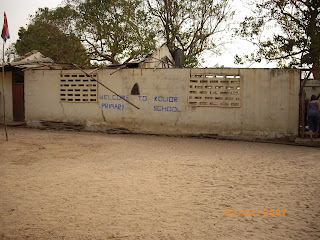 The ruined classroom at Kolior 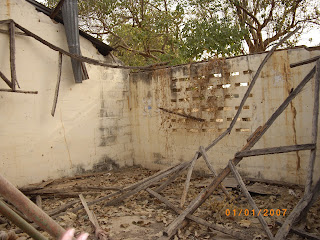 The school seemed well run, despite the difficulties it had, and we thought this would be a good school to get the exercise books bought the previous day as an ethical gift and were distributed to the children 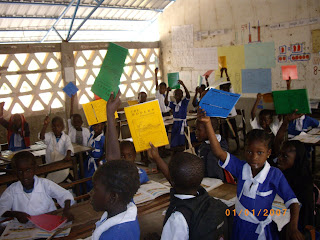 On then through the town of Soma to Misera BCS, where we met the principal Mr Cesay whom we had met many times before. PAGEANT is funding the building of three new toilet blocks there. The construction is well underway. One for the nursery children next to the nursery classrooms (the main toilet blocks are a good distance away – too far for little children to get to before there is an “accident” The other two (one boys, one girls) are next to the existing toilet blocks. We gave Mr Cesay a further stage payment before our discussion turned to a legacy issue. We had funded construction of a new block for woodwork, metalwork and home science some years ago. We still had some funds to pay for some tools and equipment for it. The school had given us a simple list of items, but they were uncosted and not prioritised as we had asked them to do. We stressed that we did not have money to pay for all so they must come up with a proper costed prioritised list. 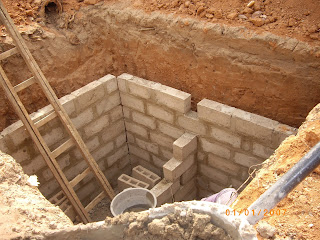 The soakaway for the nursery classes being dug 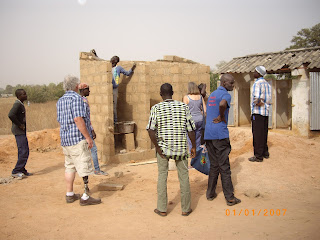 We then toured round the school grounds to see the construction work and see their admirable garden before departing for our last school visit, Pakalinding  UBS. That school had given us an estimate at the end of last year for some work it would like PAGEANT to fund. We had found it confusing as there was clearly more than one project involved and it was difficult to see what they wanted to do and how much each aspect would cost.

There were in fact four separate projects the school had in mind. New school gates. Solid sturdy metal gates of the type usually seen at Gambian schools. They only had relatively flimsy insecure grid type gates. They would like some work done on the principal’s and admin offices (the roof leaks when it rains). The library needed a thorough refurbishment, in particular a new roof, new windows and possibly getting the floor properly tiled. We were however pleased to see that they had good sturdy metal bookshelves and plenty of books, but some of those are probably not very appropriate for an upper basic school.

Some of the classroom blocks needed new windows and finally they would like to do some work on the vice principals office. That office is quite small and sandwiched between two classrooms. They would like it redecorated and retiled. We think it is probably more useful to put in a proper ceiling in the room. At the moment there is nothing between the floor and the corrugated iron roof. A proper ceiling will give some heat insulation.

That was us done for the day. We made a quick stop in Soma to get some cold drinks and then headed back to the hotel. It had been a pleasantly cool drive up in the early morning. It was a long 2¾ hour drive back through scorching heat.