Quite a short day today, but quite a lot of driving.

We set off to go to Yundum Barracks Schools first thing. We needed to give them the next stage payment to construct the library. They were rapidly running out of money from the first payment and needed more to but more materials. We are anxious to keep the momentum going.

This took a little longer than usual as one of the army’s generals was visiting the barracks and when we arrived the guard of honour and musicians were assembling. Pippa, Yankuba and Wandifa went inside with the army personnel who counted out the money (this takes a long time as the largest Gambian banknote is 200 dalasi (about £3) and it is customary to count all the money). PAGEANT is providing the funding for materials and the army engineers are constructing it without further charge. Whilst that was happening Abdoulie and I remained in the car and I taught him how to play Sudoku. Abdoulie is good at logic puzzles and he grasped the rudiments very quickly.

Back in the car, where we retraced our drive to the hotel, but then went further on to Banjul, picking up Linda en route. Banjul is the capital city and it is not an understatement to say that it is not an attractive city. It is notorious for extremely bad roads, but finally it seems the City Council is doing something about that. We had gone to Banjul to go to the bank again. Everything takes a long time in Gambian banks, but today we finished our business so hopefully won’t have to go there again this visit.

Following that we returned to the hotel.

Hopefully today was to be our last day of relatively routine and admin jobs.

We set off to Sukuta.  We had a few more sponsorship letters to deliver and now we only have a handful left. We were also giving out some ethical gifts of sacks of rice from money given for that purpose. We left one with a family in Sukuta and then carried on to Gambia College in Brikama to give them the money to buy food for breakfast and lunch at the workshops. On then, through Brikama, Abuko and Wellingara. Two more sacks of rice were delivered to families.

One thing that always disturbs me is the relative cost of rice. We buy 50Kg sacks of rice and they cost about £18 each. That’s 36p per kilo. When I got back to the hotel, I checked the price of standard long-grain rice in Tesco’s. There you can buy it for as little as 45p per kilo (and that’s for a small bag). So, rice in The Gambia is only 9 pence per kilo less. It is their staple food and it is one of the poorest countries in the world.

Enough ranting from me. We also had some ethical gift money to buy some exercise books, so we visited a stationer to buy these. We shall distribute these to a school upcountry when we go there, as these schools seem to not be resourced as well as schools around the coastal strips.

Tomorrow we will have an early start for an all day visit upcountry. We will be seeing beehives, a "2nd generation power hut and  a couple of schools.

Finally, here's a photo taken on Sunday of Fatou, Yankuba and their son, Muhammed. 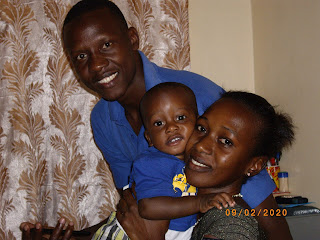