Because the flight times have changed (no Thomas Cook, so we were flying with TAP) I did not have to leave the hotel until 11pm. I was very kindly allowed to retain my room until then (thank you, Sand Beach) so I made a couple of final visits on the Tuesday morning, then visited Linda to sort out the money side of things and did my packing in the afternoon.

My first visit was to Yundum Barracks Lower Basic school, where I wanted to do several things: one was to give some really nice blouses to the female staff there, which could be used as a ‘uniform’ for special occasions.  Many schools like to do this sort of thing and we had been given a large number of these blouses by Ashtead Choral Society, who were changing their own uniform.  We could only take seven out with us on the plane, due to weight restrictions, but fortunately this was precisely the number of female teachers at this school!  Not only that, but the mix of sizes that I had selected to take, exactly fitted these ladies – they were really thrilled with them.  I asked them to explain to the Nursery and Upper Basic female teachers that some more would be arriving in due course – this was just the advance group! 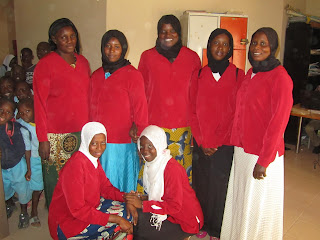 
Next, on to see progress at the library – it is really coming on apace and looks to be well built.  I expect they will be needing the third instalment payment very soon. The photos show the front and right hand side of the building – the latter shows the three-cubicle toilet block jutting out from the side of the main structure and the large pit that has been dug as the soak-away. 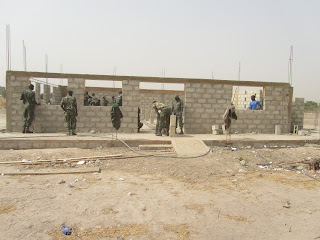 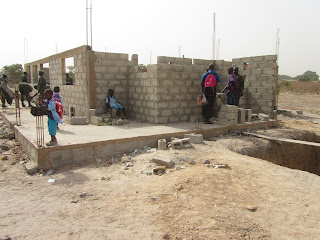 Lastly, the garden, financed largely by Worldclass at Bishops Waltham Junior School.  To show you how fast things grow in The Gambia, the first photo was taken at the start of this visit and the second one of the same beds eighteen days later! As you can see, the garden is being carefully tended by the students – each bed is looked after by a particular group and competition is fierce as to who can grow the best produce. When one considers that this was just an unfenced, bare, sandy patch in November, the progress is remarkable. 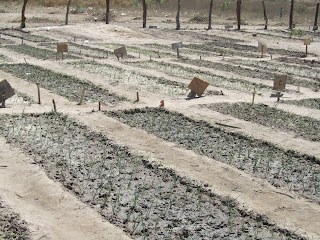 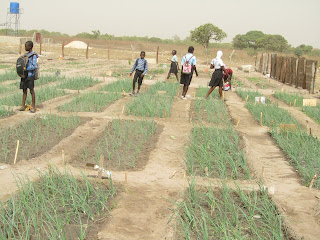 The second visit (my last one of this trip) was to Kumoo Kunda, the bee farm.  As previously reported, we had been to see the Pageant-funded apiary at Mayork Lower Basic school and I now wanted to do two things: one was to ask for two ‘catcher boxes’ for that apiary, to enable the school to ‘catch’ any wild swarms that appeared (one had been seen before our visit to the school, but they had failed to entice it to enter a hive of its own free will – hence the need to ‘catch’ it); the other was to ask for an estimate to set up a small apiary at the nearby Upper Basic and Senior Secondary school – this new apiary would be close enough to the established one for the bees to go backwards and forwards between them, so would not have to be as large to be a viable concern. The Principal of the more senior school is very keen to have an apiary there, so I know this will be a popular move – we hope to receive the estimate soon.

So, the end of yet another Gambian adventure – thank you to Linda, both for looking after the money side so well in our absence and also for her company at dinner on several occasions.

Last, but by no means least, my VERY grateful thanks to Wandifa, Abdoulie and Yankuba for their tireless efforts during three hectic weeks and for their kindness in looking after me so well during my last ‘solo’ week.  They are such a good team… and we do have a lot of laughs along the way.  Here’s to the next time…..

This is Pippa signing off – but I have to add one more photo.  We all decided it was the advertisement of the trip… I will never look at snails in quite the same way again!! 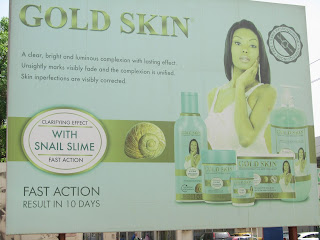