Wandifa had decided to call as many as possible of the students whose photos were still needed to come to his compound on the Sunday morning, in an effort to get as many done in the shortest time possible.  A good idea, I thought… but how many would actually turn up?

We set off, having to drive an even more tortuous route than usual, as many roads had been closed or cut down to one lane only because of the marathon. When we arrived at Wandifa’s compound I was amazed to see a really large number of students already gathered there – the photo shows the large ‘Pageant family group’ including those who greeted us… and about ten more arrived during the next hour. A very good idea – we will try that again! 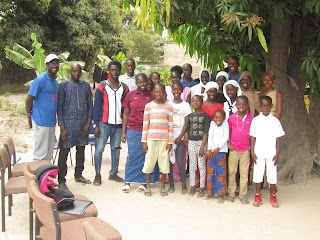 Pageant family group
We then did a bit more family visiting and had the pleasure of delivering a bike to a young lad whose results had been outstandingly good for the past few years – this is the boy supported by Ian’s bursary and I know he would have been very pleased to be able to donate this gift as a reward for such a sustained effort.  The photo shows the pleasure with which the bike was received – he said he was the happiest boy in The Gambia that day! 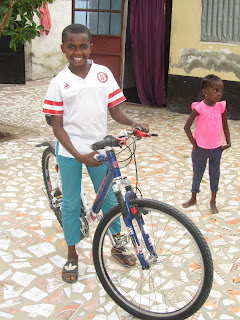 bike as a reward for outstanding results

posted by Dave for Pippa