Up at the crack of dawn… before it had cracked, actually, as we left the hotel at 5.20am!!  Even so, we were still too late to catch the first ferry as it was pulling away from the dock when we arrived at 5.45am! It transpired that only one ferry was working that morning, so it had left Banjul early enough for it to be the (slightly before) 7am ferry from Barra. It returned quickly enough for us to leave Banjul just before 7.30am, so we were in Barra just before 8am – not too bad (but we could have had an extra hour in bed!!)

First stop was to buy a sack of rice, a gift to Wandifa’s brother Bakary and family on behalf of Andrew and Kathy.  Then off down the ever-worsening sandy road to Albreda to the Lower Basic school that we have been supporting for several years. We saw the female staff quarters, now being used by one female teacher and three trainees – the ceilings that we gave the funds for in November had been completed and looked very good. All the inhabitants were very happy with their rooms – and the male teachers said they wished that theirs were as nice!!  The photos show the competed building and one of the ceilings. 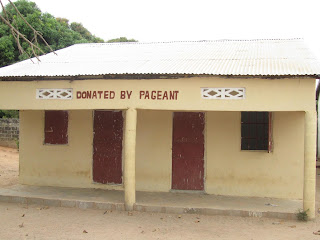 outside of the staff quarters 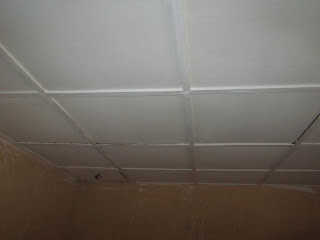 inside showing the ceiling

A breakfast stop was next – the café at Juffreh provided the usual excellent cheese omelettes and chips all round – and then on to see Bakary with the rice.  To say he was pleased would be a huge understatement – he said he had been on the point of contacting his eldest son for help as the family had completely run out of rice… and then we arrived.  I thought you would like to see just what a sack of rice looks like… and how heavy it is, being carried in by Abdoulie and our North Bank driver, Alieu. While we were there we found a couple of little boys to whom we gave hats, knitted by one of the lovely ladies of the Southwater Welcome Club – and very cute they looked, too. 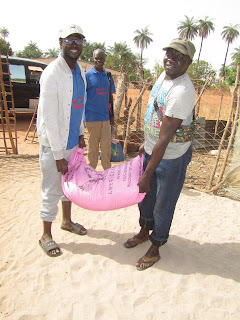 sack of rice being carried in 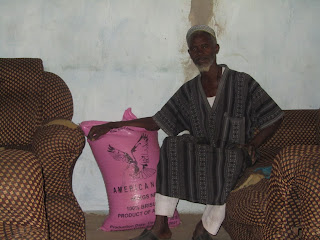 Bakary with the rice 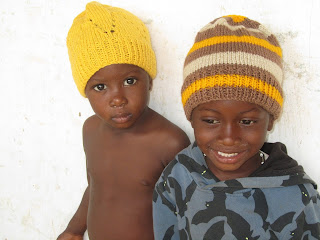 Back up that dreadful road to Barra, where we called in to Barra-Essau Upper Basic school. We have four sponsored students at that school, so it was good to catch up with them.  I also wanted to see the (excellent) headmaster there, who we have known for several years, to see if there was anything that we might be able to help him with.  He told us that the school might be moving to a different site in the relatively near future, so making any improvements to the current site could be a complete waste of money. Very frustrating for him, as he does not really know what is going to happen.

Back on the ferry to Banjul, reaching the hotel a little after 4pm – pretty good for a North Bank day.  A good shower and hair-wash was essential… and, as ever, the shower floor resembled a beach for a little while!  It is certainly a hot and sandy experience…

posted by Dave for Pippa