It's just a month to Christmas, and most of us haven't got a clue what presents to buy for our loved ones, friends or relatives. Why not avoid the shopping frenzy, by buying an ethical gift? Pageant's Gifts Page lists a range of gifts starting at just £6.50.
We supply you with a choice of four Pageant Christmas Cards together with Gift Certificates describing the gifts you chose. You send these to your friends or relatives, and the gifts themselves go to a student, a family or a village community in The Gambia.

Here are some examples:
For £7.50, a family in The Gambia receives a family-size mosquito net and insecticide. Malaria is the biggest cause of death in The Gambia, particularly in children under five and these nets are a very effective preventative measure.
£22.50 buys a family a 50Kg sack of the best rice, which will feed a large family for a month. Gambian farmers grow rice during the wet summer months, but this doesn't last the whole year, so then families must buy imported rice, which has recently become very expensive. 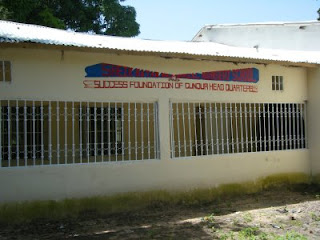 Gunjur village may be thousands of miles away from Marlborough in the UK , but relations between the two places remains as strong as ever after two decades and a half of friendship which commenced in 1982.
Latest in efforts to further enhance and strengthen the link is a visit by a four-man delegation from Marlborough led by the Chairman of the link, Dr Nick Mores. The Marlborough delegation, which is on a week long visit, is expected to pay courtesy calls on the Gnansimba (head of women), the village chief and the newly appointed Alkalo, Sulayman Touray, who was recently inaugurated amidst much fanfare and support from the villagers.
The delegation is also expected to meet with the link commitee on the Gunjur side. The absconding of eight of twelve people who visited Marlborough as part of the link's cultural exchange programme is also widely expected to feature prominently in the meeting.

Nusrat recently participated in a campaign against hunger organised by the UNHCR. The principal of Nusrat Senior Secondary School, Mr Karamo S Bojang, believes that the campaign could not have come at a better time in light of the stratospheric increase in the price of food items.
Also speaking, the deputy head boy of the school, Abdul Kabir Daffeh, called on the government to promote mechanised farming and encourage women farmers whom, he uttered, play no small role in food production. He also stated that more should be done by the Government to promote agriculture in schools, which according to him will go a long way in controlling the up-swing in the cost of food items.
The cost of food items has been a major source of concern to the Gambian public with the price of staple rice running up to D900 from D500 in a space of six months.

[Dave adds: An Alkalo is an elected village chief, equivalent to a village mayor in countries like France or Spain. In Spanish, mayors are called Alcalde so perhaps both derive from Arabic Al-Qadi?]

Nusrat Senior Secondary School recently conducted a cleaning exercise. The exercise was attended by a majority of students in the school and staff as well, in what the principal Karamo S Bojang characterised as a response to the president's clarion call for the people to clean their environment so as to ensure better health.
The exercise covered the grassy areas of the school campus and the toilet, which the principal identified as fertile breeding grounds for mosquitoes. He thanked the students for their massive turn-out and said it will go a long way in reducing the malaria contraction rate in the school, which he emphasised has an indirect impact on the performance of students.