A day of tying up some loose ends, which unfortunately meant going back to Brikama to chase up a student whose report looked dodgy and to get some reports from the School of Public Health for three of our senior students.

So... we waited in the headteacher's office while they found the correct results for the suspect student.  We were right to be suspicious... instead of the perfect score she had given herself she had actually failed everything except religious knowledge!

On going back to see the parents they expressed amazement at this...and maybe they really did not know what she had been doing. If she put as much energy into her schoolwork as she has into her report falsification she might do a lot better!

On to the School of Public Health, where we waited for over an hour to get three reports printed off. To say I was frustrated is a gross understatement... I think Wandifa was worried I was going to explode with rage!!

For some reason that is beyond me, this college does not let the students have their results as they progress... so one of them, who is not doing very well, was completely surprised and shocked when he saw his marks. We were only allowed to have them as I had explained there would be no further sponsorship payment without them.

We dropped into Yundum Barracks to see the engineers and to discuss how payment will be made, should the final go-ahead be given to the library project. A mere fifteen minutes wait there... not bad as we were completely unexpected.

Back to the hotel... I collected all the financial stuff to take to Linda's for a final end of visit tally and the guys went off to chase the paperwork for the new minibus.  Success all round... the numbers added up and the paperwork has finally arrived... quite a good day in the end...

[Well that is probably the final post for this visit from Pippa in The Gambia, as she will be flying home tomorrow. I am slowly copying all these posts into a summary webpage, so they are all in one place as a record of Pippa and Andy's visit.]

We started out a little later than usual... 10am... to allow for Sunday morning lie-ins (or should it be lies-in?!)

Our first visit was to see a student studying accountancy...she is just completing her second year and needed the money to pay her exam fees.

Next, one of our favourites... the Manneh compound. Such a lovely family, it is always a delight to visit them. We saw four sponsored students there....

.....  and then went on to another very special compound where the Touray family lives. We saw six sponsored children there, gathered in from the neighbourhood to see us, plus another who was just returning from the market as we were leaving. We know many of these children very well indeed, several of them from babyhood, and it is so heart-warming to sit with them and hear all their news of family and school.

On to a family where the sponsor is currently unwell and unable to sponsor the child this year. We have said we will support her for the current year and hope he will be well enough to pick up the sponsorship next year, as he is very fond of this child and has helped her for several years. If he cannot do so we will do our best to find her another sponsor.

Our last call was to deliver an early Christmas card and gift to a delighted girl... a lovely surprise for her, the more so as it was completely unexpected.

Back to the hotel... quite early again... but not quite finished for the day as one of our long-term but more erratic parents, threatened with no funds unless he complied with our rules, came to deliver the school reports for his two children. I read him the riot act about bringing them on-time next year.... and he mumbled and went away. We'll see if he remembers!

The visit to Wandifa's compound was a great success... in all I saw 14 sponsored students there... some coming for their pencil cases, some for fees, some just to have their photos taken.  Lovely to see so many and to be able to chat to each one in turn about what is next on their horizons. A bit of a cheat really, as it meant I was not seeing them at their own homes or schools, but at this stage of a visit it was a very good idea.

There were also two students there who were requesting sponsorship.. reports were produced and photographed as were the children themselves.

Our last task there was to give out several very nice school bags to UNsponsored children... these were part of a very generous donation by the Welcome Club of Southwater, to whom I had recently given a talk. 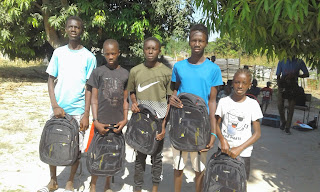 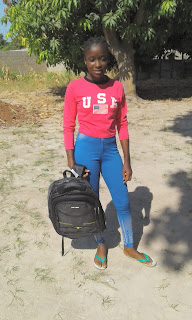 We then went to visit a few compounds in the area just south of the airport and caught up with several more students.

Then back to the hotel at the amazingly early time of 2pm... I actually managed a swim (my first of this visit - and my first since my accident in January) and a couple of hours by the pool.

A very welcome hairwash followed by dinner at Luigi's with Linda completed a most productive and enjoyable day.